In this post, we’ll talk about Yemen. We’ll learn about Yemen people, Yemen language, Yemen religion, Yemen map, and we’ll be checking if Yemen is a country or a city, if Yemen is safe to visit, what to do in Yemen while you are there, sightseeing places to visit in Yemen!

The Middle East is mostly known as the conflict area between the world powers, however, these countries are amazing in tourism, such as the Arab states around the Persian Gulf, where you can find countries such as Bahrain, ranked as one of the best countries to be an expat.

Yemen is the country we all know from Yemen related news. Unfortunately this country didn’t have the opportunity to show its bright side to the world but in this post, we’ll see what Yemen has to offer in Tourism.

Let’s start with the recent history of Yemen.

Yemen’s colonization by the UK

Yemen was colonized by the UK for a while. At one point, even Queen Elizabeth visited Yemen in 1954.

Yemen’s independence from the UK

Yemen has a population of 28.5 million people. About 93% of Yemen people are Arab while the rest are Somalis, Afro-Arab, and Indian-Pakistani.

The sole official language in Yemen is Arabic but as a former British colony, English is widely taught in this country, especially in southern Yemen. There are also some notable Russian speaking people, mostly living in the capital, Sana’a because of cross-marriages mostly in the 70s and 80s.

Yemen is a Muslim country. Half of the Yemeni people are Sunni Muslim and the other half are Zaidiyyah (Shia Muslim).

There are approximately 50 Jews left in Yemen. About 200 Yemenite Jews were taken to Israel through the Jewish agency in 2016.

What to do in Yemen

Yemen is not a safe place to visit for now, but here’s the video of the latest foreigner tourist that stepped far inside the mainland Yemen, Drew Binsky.

Dar al-Hajar was the palace for the Royal family. It’s been used for a few years until the 1962 Yemen revolution that they changed it to a public museum. 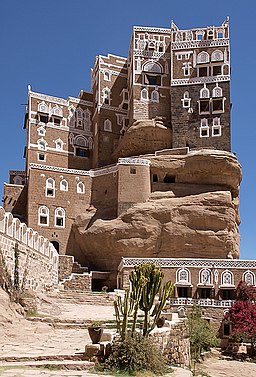