In this post, We’ll talk about Venezuela, a beautiful country that’s not in its best shape these days, but deserves to be heard for something rather than its on-going crisis!

Venezuela was colonized by Spain in 1522 and established a European-style civilization in Venezuela.

Venezuela after independence from Spain

Since becoming a sovereign state, Venezuela has been through a lot. Venezuela was once one of the most democratic countries in Latin America, but after the latest election, the situation changed dramatically.

Nicolás Maduro, the latest Venezuelan president could not control and provide for people which resulted in a big mess when people couldn’t even find their basic needs such as flour or protein. People started protesting against Nicolás Maduro, the President and in return he shut them off and expanded his power!
Since the starting of recent Venezuela’s crisis, more than 3 million Venezuelan have fled the country, only for not dying because of the lack of food! There’s even a report that a young man has been eaten in a Venezuelan prison, after a long time of starving prisoners because of their lack of basic needs! Yes, even Cannibalism has happened in Venezuela because of the recent crisis!

Venezuela has the highest inflation rate in the world in 2020

For the 4th year in a row, Venezuela has the highest inflation rate in the world in 2020.

Venezuela has a population of 28.9 million people in it. 51% of Venezuelans are Mestizo (Mixture of European-indigenous-African) and the rest are white (European). there’s also a small population of Amerindians (Indigenous South Americans) and Black Africans living in Venezuela.

The sole official language in Venezuela is Spanish, however, more than 26 local languages and dialects are being spoken in Venezuela, making Venezuela one of the most linguistically diverse countries in Latin America.

About 89% of Venezuelans are Christian, and the rest of the population is mostly irreligious people who either only believe in God or being Agnostic or Atheist.

What to do in Venezuela

Book beach resorts and hotels in Caribbean beaches of Venezuela

Venezuela has a long Caribbean coast with more than 15 Venezuelan Caribbean islands to relax at and enjoy! The Venezuelan Caribbean beaches are as good as any other Caribbean destination, offering white sand beaches with the clean blue water!
Some national parks such as Morrocoy National Park are ready to offer you an incredible Caribbean vacation! 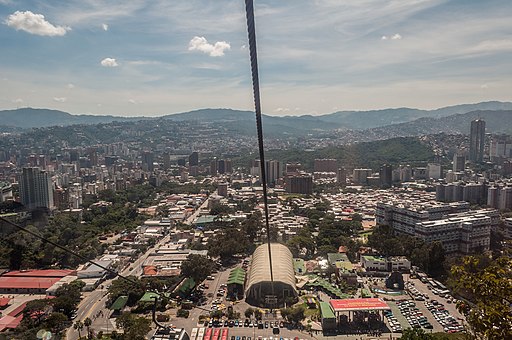 This cable car takes passengers in Caracas and takes them to El Cojo, where a breathtaking view of Caracas is waiting for them!

National Pantheon of Venezuela is a tomb for Venezuelan national heroes such as Simón Bolívar (the whole tomb was dedicated to him at first!).

Pantheon is a Greek word, meaning “Temple of all the Gods“.

11 thoughts on “Venezuela – the highest inflation rate in the world”