Canada is blessed with the most beautiful nature one could find on the earth. This country is full of stunning jungles, rivers, lakes, and fascinating coastal scenery. In fact, Canada was the first country in the world to establish a national park service, so it would be reasonable to say Canadians know how to appreciate outdoors and protect them at the same time.

Canada is full of national parks throughout the country, each being unique in a way or two. Plus, with slightly more than 38 million population, you can rest assured that you’d share its national treasures with very few people, if not being the only one there! Then forget about Canada’s southern neighbor’s overcrowded parks!

In this post, we’ll introduce you to the top 10 national parks in Canada.

Visitors love to see the bluest water of Lake Louise and Moraine Lake, which are surrounded by beautiful trees and cliffs. However, don’t listen to your gut if it wants you to swim in these lakes as they’re freezing cold. Instead, you can swim in Banff Upper Hot Springs, also located in the park.

If you’d like to take one of those ironic pictures in the Banff national park, get there early to be the only human in the camera’s frame, you might also be lucky enough to witness animals over there as well, like bears (black and grizzly), elk, wolves, and foxes.

You’d also have the option of camping at Banff national park from rugged campsites in the backcountry to fully serviced campgrounds close to the town of Banff.

Cape Breton highlands national park offers one of the most beautiful scenes in the country. This park is surrounded by Atlantic Ocean’s water.

The beauty of this national park is so accessible that you don’t even have to get out of your car, but you want to pull aside to hike one of the park’s 26 hiking trails like Skyline trail (8.2 KM) which would take you to the cliffs, overlooking the sea!

If you want to experience the best of mother nature while walking, Pacific Rim national park reserve, near Tofino, BC is the place to go!

It’s always raining over there with some wild storms during winter, but summers are nice and pleasant for a walk in this stunning national park, like the 75-kilometer West Coast Trail. This long trail was first established by the first nations who were navigating their way to safety.

Being a UNESCO World Heritage Site, Gros Morne National Park is blessed with having 1,805 square kilometers of fabulous scenery on the west coast of Newfoundland. The most famous vista in this park is Western Brook Pond Fjord.

If you are interested to experience the earth’s mantle (the layer below the Earth’s crust), visit the Tablelands that offer you hiking alongside the mantle.

But for the best view possible, you should definitely hike to the park’s highest point, Gros Morne Mountain.

Fundy National Park, home to the world’s highest tides, is a magician. The water level rises 12 meters in the muddy ocean floor, in only a few hours which is completely visible if you pay attention ever for a few minutes!

Fundy national park also has tons of trails to hike in a day or a few hours. They’d take you to beautiful waterfalls and you can also camp on the way!

If you’re into canoe, kayak, or paddleboard, Waterton Lakes national park would be your Mecca! As you can already guess, this park is full of beautiful lakes. You can also hike around the lakes, and if crazy enough, jump in one of the lakes, but don’t expect warm water, even in the middle of summer.

The Kluane national park is Canada’s highest point at the 5,959-meter in Mount Logan. This park is good to explore for professional mountaineers. However, you also have the option of hopping on a plane or a helicopter to see the vast icefields from above, which is called “flightseeing”.

Not all national parks are mountainous. Prince Edward Island national park is made up of long sandy beaches that are easy to walk along and fun for a young family with kids since most of its trails can be walked in less than an hour and are too easy compared to most other national parks in Canada. 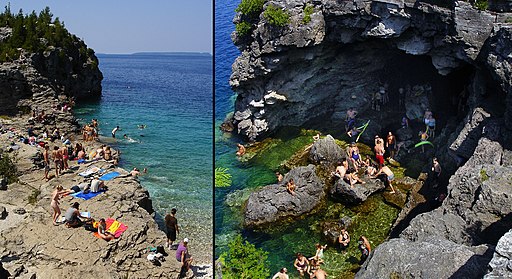 Bruce Peninsula national park is a hidden gem in Ontario. The water in there is so blue that your mind would trick you that you’re in Caribbeans!

It would be a fun day to spend some time around Lake Huron which is only 3.5 hours away from Toronto.

If you want to visit Canada’s wilderness at its finest, Jasper national park is the perfect place to go, no matter if in winter or summertime!

However, during winter, it can get really cold, so, don’t forget to take your snowshoes with you!