When the topic is South America, we usually think of Brazil (And if educated enough) Chile and Argentina! Yet, there’s this country, known as “Heart of South America” so-called Bolivia, waiting to be seen by travelers!

Let’s get familiar with this Espanol gem!

Well, Bolivia had a war with all of its five neighbors but, they’re getting along much better now.

The main war’s con for the country was losing its tenth province to Chile which gave it access to the ocean. As a result, they are officially landlocked!

The majority of Bolivians are mestizo (with the indigenous component higher than the European one). most of them still wear their traditional clothes.

Their Spanish accent is different from Mexico and Spain’s dialect because it’s mostly influenced by the natives’ language.

What to do in Bolivia

Visit both Capitals of Bolivia

Yes, both La Paz and Sucre are capitals and share the responsibilities.

There are a lot of affordable tours to this fascinating place.

Also known as “Bolivia’s road of death”, this 80 km wide road hosts more than 25,000 tourists who dare to cycle the whole way.

The Witches’ Market in Bolivia

This one is not like your typical farmers market! Witch doctors sell all of the weird stuff like special herbs, powders, and spiritual items. The market is so colorful and always busy. 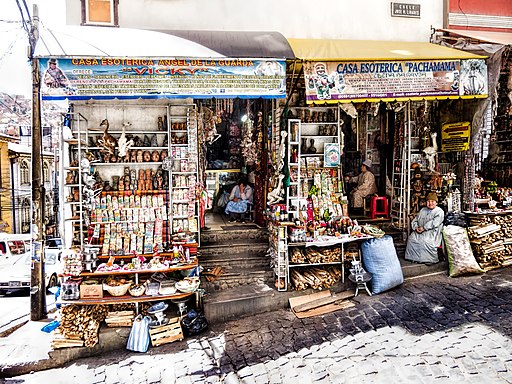 This unique place is only 10 km away from La Paz where the stones and cliffs look like the moon’s surface.