We are used to categorizing the whole of South America as “Latin” or even worse, “Mexican!” but the truth is that each country in the Americas is different and unique in some ways. Not all of the South American countries speak Spanish and eat tacos! For example, Belize in Central America is an English speaking country or French Guiana (as you can guess from its name) speaks French, and the biggest country in South America, Brazil speaks Portuguese.
This region is so unique that it’s worth spending some time, getting to know them.
In this post we’ll talk about the only Dutch-speaking country in Latin America, Suriname!

Suriname’s colonization by the Netherlands

In recent history, Suriname got colonized by the Netherlands and officially became a Dutch colony in South America. During WWII, on 23 November 1941, the Dutch government allowed the US army to occupy Suriname for a while to protect the Dutch reserves, the bauxite mines, in Suriname, Latin America.

Suriname’s independence from the Netherlands

Suriname relied on generous help from its former colonizer, the Netherlands for a while until it could stand up on its own feet.

The Surinamese government has ever since experienced ups and downs like a Suriname’s military coup d’tat, followed by a dictatorship but now Suriname is a democracy, ranked 49th in Democracy index of the world.

The vast majority of Suriname’s 575,000 population are descendants of migrants from Africa, India, and China. Their ancestors were brought to Suriname either as slaves or workers and after the Abolition of slavery in Suriname by the Netherlands in 1863, they decided to stay there rather than going back to their former countries.

Suriname’s mass migration to the Netherlands

About half of the people in Suriname identify as Christian, whereas the half is either Hindu or Muslim. There’s also a small Jewish population living in Suriname as well. Different religions in Suriname get along pretty well with others. It’s not uncommon to see a church, a mosque, and a synagogue, right beside each other!

Suriname is the smallest country in South America

being only 163,820 sq km, Suriname is the smallest country in South America

Just for fun|Geographical riddle about Suriname

Imagine a Chinese worker who goes to Suriname a few centuries ago for work. When the independence is happening in Suriname, the worker and his family choose to be Dutch, move to the Netherlands, and start speaking both Mandarin and Dutch at home. After a while they decide to migrate to the US and a few years later, the worker’s granddaughter is born in Canada while they were in Vancouver for holidays. Where is the newborn girl from?

What to do in Suriname

Beach resorts and hotels in Suriname

Being located in the Caribbeans, Suriname has a beautiful coastline with gorgeous beaches. You can choose between Suriname’s beach resorts and hotels to have your next dreamy vacation to the Caribbeans.

The Palm Grove in Jagtlust, Suriname is full of the Royal palms and was originally made by the governor of Suriname, Cornelis van Aerssen for his wife. Romantic, eh?

Jules Wijdenbosch Bridge connects the capital, Paramaribo to the eastern side city, Jagtlust.

This is the bridge you cross when going to visit the romantic Palm grove that we mentioned above! 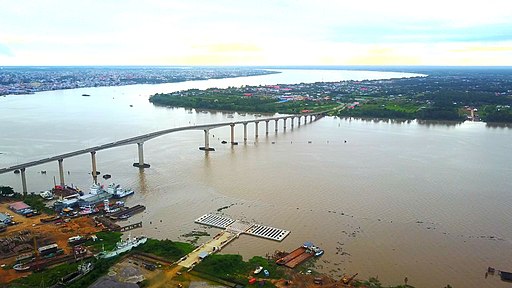 16 thoughts on “Suriname, the only Dutch nation in Latin America”