Latin American countries are too diverse in different aspects to be generalized as either Spanish our Mexican!

Even in different regions of one country, you’d witness subcultures or completely different tribes, like Honduras, where it rains Fishes for real, or Guatemala, where you’ll find all of those cool Mayan civilization! You can find a lot more in our Americas Category.

In this post, we’ll talk about another underrated Latin country called Paraguay.

Let’s scratch the surface by the country’s recent history.

Like some other Latin fellows, Paraguay was annexed by Spain until May 14, 1811, when they declared independence and experienced different governments, good and bad! At some point, the government even banned same-race marriage that resulted in more diversity (Looking at its bright side!!).

Paraguay was considered a politically isolated country under a dictatorship government led by Alfredo Stroessner who was the country’s president for about 55 years! However, they changed their path in 1991 and today Paraguay is a democratic country with good relationships with everyone (Maybe except China since Paraguay is the biggest country which recognizes Taiwan).

Paraguay is the only country where white people speak an Indigenous language called Guarany since it’s an official language and taught at school besides Spanish!

Paraguayans aren’t interested in traveling or migrate to other countries and if they visit another Paraguayan abroad, they go crazily happy and supportive!

What to do in Paraguay

Even though Paraguay is a landlocked country, it has a lake with crystal clear water and sandy beach that makes it perfect for such tourism, as well as bird watching in this beautiful region.

You can play beach volleyball, kayak, dive, and even ride a horse in Laguna Blanca.

Cathedral of San Lorenzo in Paraguay

Built in 1775, this gorgeous Roman Catholic church is a must-see if you ever visit Paraguay. 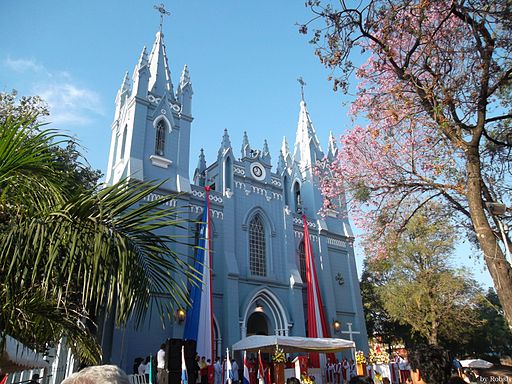