We all heard about Genghis Khan (Cengiz Han), but very few people know that he was from Mongolia and even though in most parts of the world, he’s responsible for his mass murders\ and destruction, he’s considered the National Hero of his birth country, Mongolia! His DNA is in (almost) every person in the world while 1 out of every 200 people is a direct descendant of Genghis Khan (Cengiz Han).

We’re talking about the guy whom China’s great wall been built for! His country must be pretty exciting, like himself.

Let’s learn about the country we all (sort of) belong to, Mongolia!

Although Mongolian Empire once ruled the Ancient world, in recent history, it got annexed by China, and by USSR’s help, Mongolians could have a sovereign nation again and declared as an independent country on July 11, 1921.

As of the result, Mongolia set up close ties with the USSR for the next seven decades and the fun fact is that after the collapse of the Soviet Union, Mongolian politicians were inspired to make a change and changed the country’s system towards democracy and now, Mongolia is a democratic country, and it’s above Romania (An EU member) in Democracy index! (That’s what I call inspiration!!)

After becoming a democracy, Mongolia’s economy boomed and now the urban areas are (Somewhat) as modern as a typical Asian city!

Mongolia is the world’s 6th least densely populated country in the world, having a population of a bit more than 3.1 million. People are from different tribes with different dialects, however, they all are (sort of) able to communicate in Mongolian.

What to do in Mongolia

Ulaanbaatar, the capital of Mongolia

The capital of Mongolia, Ulaanbaatar’s skyline has been changing rapidly because of its booming economy, making it a great place to witness both the Ancient and modern side of Mongolia.
Don’t forget to take your warm clothes during the cold season as Ulaanbaatar is the world’s coldest capital. 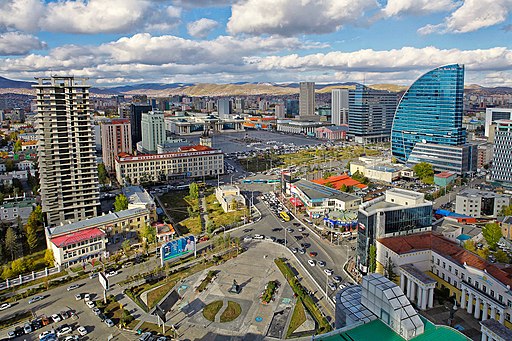 Mongolia is all about green hills and the blue sky! Nature lovers usually find themselves in this country, conquering hill after hill and mountain after mountain!

Gorkhi-Terelj National Park is a great park to see what I’m talking about with your eyes! There are also tours available there, both for climbing and camping.

Genghis Khan is everywhere in Mongolia, on the mountains, on money, numerous statues of him everywhere and special places and streets after his name. Equestrian statue of Genghis Khan in Ulaanbaatar is the most famous monument in the country to visit.

National Museum of Mongolia in Mongolia

Mongolia has a very interesting history, even before its massive Mongolian empire. People have been living in this country (Almost) since 850,000 years ago!

The national museum of Mongolia showcases it all, from a very early time till recently and even the culture of its people.

24 thoughts on “Mongolia – where we all come from – Mongolia Tourism”