Where is Angola located? What is expat life like in Angola? Is Luanda in Angola a good city for expats to live in? What is Angola’s language? What’s people’s religion in Angola?

It’s unusual to see any other city rather than Hong Kong or Singapore to make it to the top of the lists in being expensive but Angola’s capital, Luanda kept its spot from 2015 to 2018. To know the reason, we should dig deep into this mysterious country!

Angola was colonized by Portugal for about 400 years. After they left, the official language of Angolans became Portuguese and they continued their friendship with Portugal.

As the country was under occupation, Cuba decided to help its fellow communist friend to fight against the unhappy armed tribes and then sent its Engineers (Mostly Agriculture specialists) to help them. until that time, Angola produced most of its needs but because of Cuban’s mistake, their lands lost their fertility after they advised them to grow sugarcane instead of coffee and other corps that they were growing.

In 2002, a few years after their independence from USSR, they held a democratic election and the country was moving forward but suddenly they discovered oil which changed the game!

After discovering oil, a lot of foreign specialists moved to Luanda to work there which resulted in the demand for housing and western goods.

Since they imported %99 of the country’s needs by importing, the grocery prices increased dramatically and also those newcomers needed somewhere to live which skyrocketed the housing prices in no time and also in less than 10 years, the capital’s skyline transformed by skyscrapers all around. 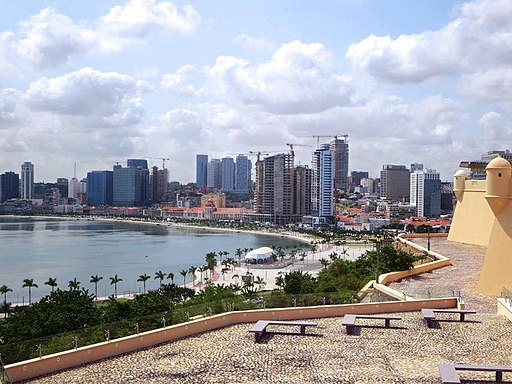 Now, a simple sandwich costs more than $15 and you can expect to pay more than $5000 for a two-bedroom apartment!

China constructed a whole town for them but because of the high prices, it turned into a ghost town with less than %10 of the units being sold!

What to do in Angola

Get surprised by the prices in Angola

hang out in its local supermarkets and restaurants to see the highest prices of your whole life! It releases some adrenaline and you’ll be like, “Let’s see how much a coke costs, how about a phone?” and you’ll spend a few hours checking the prices and be grateful for your hometown!

A lot of people are chilling at the beach, join them to forget about the prices for an hour or two!

This massive national park is only 70 KM away from Luanda. You can book local tours through your hotel. They’d take you in the morning and you’re back at your hotel at night.

Viewpoint of the moon

Only 40 KM away from Luanda, you can find this spectacular place where the shapes and looks of the cliffs are like the real moon.

The new generation in Luanda is open-minded and wise. Don’t miss the opportunity of having a good conversation with them.

13 thoughts on “The Ultimate Travel Guide to Angola”