Georgia in Europe is a hidden gem, yet to be discovered by adventurous travelers who are down for a decent unforgettable trip.

Georgia is an Eastern European country, neighboring Russia, Turkey, Armenia, and Azerbaijan. This country has countless tourist attractions that would satisfy any traveling type you are into, whether you’re into adventurous, foodie, luxury, relaxing, or history trips (or a combination of them).

In this post, we’ll introduce you to the top 10 things to do in Georgia to satisfy any traveling taste.

Prometheus Cave (AKA Kumistavi Cave) is a Karst cave, in the Imereti region of Georgia. This cave was discovered in 1983 and was planned to become a tourist attraction but after the collapse of the Soviet Union, Georgia’s newly independent government didn’t have enough funds to continue the project. During the waiting time, a local man and his dog guarded the cave voluntarily, and finally, in 2007 the project was restarted in 2007, and Prometheus cave was opened to the public on May 26, 2011.

In honor of the guardian man and his dog, their statue is built at the entrance of the cave.

Gudauri Ski Resort in Georgia is located on the south-facing plateau of The Greater Caucasus Mountain Range in Georgia.

Gudauri is good both for kids and adults and it has a lot of snow from December to April. Gudauri is the largest and highest ski resort in Georgia.

Martvili Canyon is a beautiful cave in Georgia where the Canyon, waterfalls, and caves were formed over time by a River called “Abasha”.

You can enjoy having a boat tour, pedestrian tour, and even diving in Martvili canyon.

If you are interested in history, you should visit the heart of Georgia’s modern history, Freedom square in Tbilisi where a lot of the country’s movements has had happened in the last century up to now. Freedom square is the place where U.S. President George W. Bush and Georgian President Mikheil Saakashvili were celebrating the 60th anniversary of WWII’s end with 100,000 other people on the square.

Ali & Nino statue in Batumi, Georgia is about the tragic love of the Muslim boy, Ali, and the Christian Georgian princess, Nino. This statue rotates 360 which is very unique and interesting to see in person. Don’t forget to visit Ali & Nino’s statue at night as well since it gets illuminated.

Rike park is one of the most modern parks in Georgia with a peace bridge and a few other architectural designs throughout the park. Rike park is great for an afternoon family time where there’s a giant chess to play, a white grand piano, peaceful corners, and a few ice-cream sellers to buy sweet treats.

If you look at the Rike park from a bird’s view, it shows Georgia’s map!

This large round stone and concrete structure monument was built in celebration of Soviet Russia and Soviet Georgia’s friendship. It is looking at the Devil’s valley in the Caucasus mountains.

Batumi is a seaside city in the western south of Georgia, beside the beautiful Black Sea. It is so relaxing and soothing to walk alongside the beach, looking at Batumi’s beautiful beaches.

There are many hotels in Batumi to choose from. Batumi hotels and in general, Georgia’s hotels would fit any budget.

Argo cable car in Batumi is 2,586 meters long and the height is 256 meters. After reaching the top, you’d enjoy a breathtaking view of Batumi and the Black sea. There’s also a restaurant at the top that serves both drinks and food. 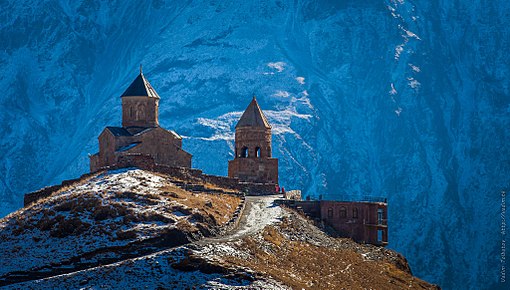 Gergeti Trinity Church is a historic church, located on the right bank of the river Chkher at an elevation of 2170 meters (7120 feet). Its main purpose was to protect precious relics at the time of danger, such as Saint Nino’s Cross.

In order to reach Gergeti Trinity church, you have two options, hiking or riding a normal car! Up until 2018 the only way to get to Gergeti church was to hike, but they built a road that gets there, by any type of vehicle!

8 thoughts on “Top 10 things to do in Georgia, Europe”