Madagascar, the paradise for wildlife lovers

Not one day goes by for me without getting surprised by a new fact about the lovely continent of Africa. This continent is full of diversity and unique experiences, check out our Africa’s Category to get a clue what we’re talking about!

Our next destination is the 4th largest Island on planet earth called “Madagascar”!

You’ve surely heard the name before from the “Madagascar” cartoon series (which I watched over 20 times each!) and already have an idea of how bio-diverse this island is!

Let’s start scratching the surface by a little bit of recent history!

The Island had been colonized by France until June 26, 1960. After that, the government tried to have a friendly relationship both with France and other Western countries such as the US except for a short period that they were practicing Communism!

As soon as you walk into the country, you’d notice that Madagascans don’t look like other African people! They come in all shades of skin colors and there’s a reason behind that! Some people have migrated to the island from Southeast Asian or East African countries and some others are of Arab, Indian, or European ancestry.
The educated people and the government officials speak French but the vast majority of the country adopted a language called Malagasy.

What to do in Madagascar

Avenue of the Baobabs in Madagascar

These special trees beside the road, are a popular destination among visitors because of the unique landscape they offer.

Despite its size, Madagascar is home to a lot of unique species. More than %90 of all plant and animal species found in Madagascar are endemic.

This small island is off the coast of Madagascar and it has such beautiful beaches.

Queen’s Palace is a huge gorgeous palace, originally built for the late Queen of Madagascar’s kingdom, Queen Ranavalona. A handful number of the Royals and government officials resided at the palace between the 17-19th century. 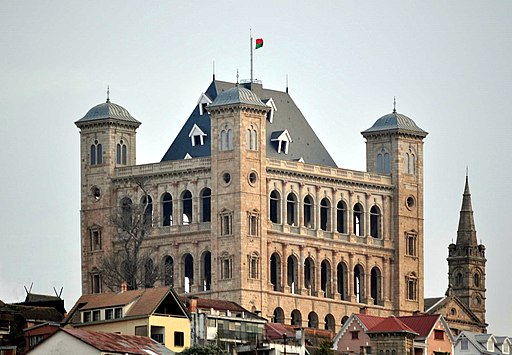