We as humans, draw borders to separate ourselves against the outside world and rather to only allow those who are like us or have no harms against our country to pass the border. In some cases thou, the lines we drew are so funny and sometimes even make no sense at all! Like the Netherlands-Belgium border complications, or two Spanish cities of Melilla and Ceuta inside Morocco, or even French Guinea, an official part of France in South America!

In this post, we’ll talk about the fact that the United States and Russia are neighbors and the border between them (at the narrowest part) is only 4 km (2.4 miles).

The US purchase of Alaska from Russia

In 1859, Russia officially offered the US to buy the Alaska region from them and attach it to the US’s soil which went unnoticed since the civil war was happening at the time, but as soon as it finished, the US government accepted the offer and bought Alaska for $7.2 million on March 30, 1867.

For three decades, no one in the US government paid any attention to Alaska, so the region was not under any American civilization or support, and even some politicians remembered the Alaska treaty as a waste of money until they found gold in Alaska! The whole Alaska thing came up again and they formed towns and cities in the area and in July 1957, when they discovered oil in Alaska, the Federal government of the United States took it very seriously which eventually resulted to Alaska becoming a US State on January 3, 1959.

There are two islands in the middle of Bering Strait called “Diomede”, the bigger one is “Big Diomede” and the small one “Small Diomede island”. A few families of Iñupiat (Eskimo/Inuit) lived on each side, all being relatives. They used to commute to each other’s islands to visit and trade.

After the Alaska treaty was signed, “The small Diomede” was officially in the US while “The big Diomede” was still a part of Russia. Both the American and the Russian government notified the Diomede residents of what had happened, but they didn’t care and continued their old ways of commuting and frequently visiting each other until WWII.

During WWII, the Russian government decided to transform “The big Diomede” into a military base which resulted into replacing all of “The big Diomede” residents into mainland Russia which brought an end to the unification of the Iñupiat families of Diomede islands.

Today, “The small Diomede” is home to 119 people. They are nice, warm, and hospitable. There’s only one school on the island with 5 teachers for grades pre-K through 12, making Diomede school, the most isolated school in the United States. 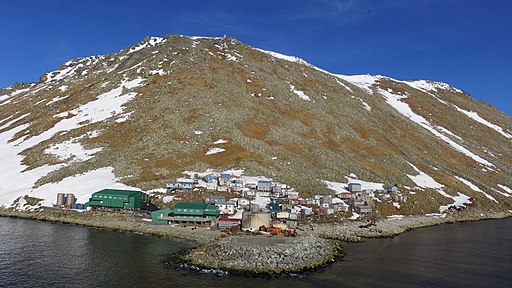 Even though there are some seasonal jobs available, the employment in Diomede is limited to the city hall, post office, and the school. When it’s spring, they also go Whale hunting.

Officially, Russia and the United States are neighbors with the Diomede islands being only 4km (2.4 miles) away from each other. Some media, people, and organizations are interested in building a bridge between the islands but not the US, nor the Russia’s government seem to be interested in it.