In this post, we’ll talk about the cheapest country in Europe where you’ll find Europe’s friendliest people. We’ll learn about Romania people, Romania language, Romania religion, Romania map, and we’ll be checking if Romania is a country or a city, if Romania is safe to visit, what to do in Romania while you are there, sightseeing places to visit in Romania!

The cliches world is never-ending, it makes our world what it is!
I’m not against stereotypes, but only enjoy funny ones like All French men are romantic, or In Italy, they eat Pizza for breakfast!
A beautiful country like Romania doesn’t deserve cliches like “everyone in Romania is a Gypsy” that affects its tourism. Instead, of that, did you know that the real Dracula lived in Romania?

Let’s get to know this mysterious country.

Romania was affected by both WW I and WW II.
The Soviet Union occupied the country from 1944 to August 1958 and forced its King to resign. It was a dark time for Romanians. After a few years, they were like, “Enough is enough!” and revolted which transformed the political system for good.
The government tried to become closer to the West and eventually joined NATO and the EU but because of the corruption and poor economy, Romania is not allowed to use the Euro as its currency.

Romanians and Moldovans are basically the same race with different terminals. More than %89 of the population identifies as Romanian with the biggest minority being Hungarian.

People are friendly and nice (They mind their own business mostly) and true meat lovers! If you ever visit it there, you’ll see big barbecues with chunks of meats on them and people standing in line with a plate of bread and mustard in their hands.

What to do in Romania

this mysterious castle is where the real Dracula (a savage king) lived in. The castle was built in the 12th century and attracts tons of visitors every year (What’s cooler than visiting the real Dracula’s home?!)

Râșnov Citadel is a gorgeous palace to visit. It was first built as a defense castle. They recently updated the Castle with a Hollywood inspired sign!

This underground salt mine was opened to the public in 1992. It’s a must-see if you are visiting Romania. When you go underground, you have the view of a lake and UFO-shaped construction sites! 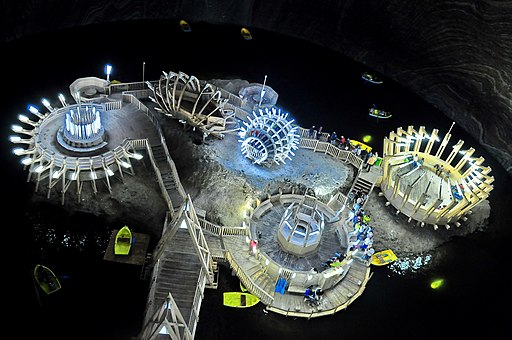 You can’t be in Romania and not visiting its stunning beaches, especially since it’s a Black see kind of beach!