Africa’s beauties and facts are uncountable! There’s always something new to make you go like Wow! This continent is truly underrated and has a lot of room for growth in tourism.

This continent is truly diverse, both in its nature and people. Any major language you think is being spoken there beside their local dialects! There are English speaking countries, French, Portuguese, and even one German nation called Namibia!

Are you curious to know more about this special German-speaking country?

Namibia was colonized by Germany for a few years which is the main reason this country adopted German language and cuisine but after a while, South Africa took over and made Namibia’s official language, English to sync it with itself and didn’t allow Namibians to have a Sovereign nation until February 9, 1990, when UN put pressure on South Africa for two continuous years.
After independence, Namibia’s government set up the country’s roots on Democratic values which made the country what it is today, one of the Democratic countries in Africa!

Namibians are all African with a minority of %2 Europeans who are mostly German and British.

They speak German, English, Afrikaans, as well as 9 regional languages.

The culture is influenced by Germans in many ways, like cuisine, entertainment, and even the street names! On every corner in major cities, you’ll find German-style bars that serve Beer and delicious German food like their sausages.

What to do in Namibia

Windhoek, the capital of Namibia

This beautiful city is Namibia’s capital and constantly ranks among the top 10 cleanest African cities every year. 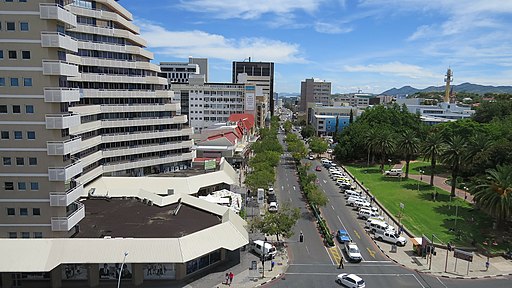 Etosha National Park has great biodiversity where you’ll find animals like the African bush elephant (a unique elephant that lives in Saharan areas), African leopard, and Springbok!
Etosha has high-quality camps such as Dolomite Camp, Onkoshi, and the newest one Olifantsrus, and all of them are being controlled by Namibia Wildlife Resorts.

Sossusvlei is a large area that is made of salt and red sand! It’s famous for its high sand dunes that could have a color range of pink to orange! You can book tours to be taken there and even if you’re not interested to climb the dunes, just sit and enjoy the surreal view that could be found nowhere else on our planet!

25 thoughts on “Namibia – The only German speaking country in Africa”