Paradise is where you can chill, clear your mind, and get energized! That’s what our next country is all about, being a piece of heaven, that….is…..Drowning!
We all heard about climate change and its effects, but did you know that it’s already causing the disappearance of a 120,000 people’s home?

Today’s post would be a little different, but more educational! Let’s get to know the Island country of Kiribati!

Kiribati is made up of 32 atolls and one solitary island called Banaba, extending into the northern and southern hemispheres as well as eastern and western hemispheres, making Kiribati, the only country that is situated within all four hemispheres (If we ignore France’s territories).

Kiribati’s eastern islands are the first places on earth that the day starts, making them ahead of Japan and New Zealand.

Kiribati’s independence from the United Kingdom

In recent history, Kiribati was colonized by the UK and finally declared as an independent state on July 12, 1979. Even though they took the control themselves, it was still hard to do it without help, so the Brits were like, “Sure!”

The Sea level in Kiribati

Kiribati’s islands are only 1-3 meters above the sea level, putting them in extreme danger of disappearing. 3 Islands are already drowned and the rest are too close too!

Locals’ problems with the sea level in Kiribati

Locals are rapidly losing their homes are the waves are destroying walls and one of the only roads they have which connects some of the islands.

There’s no absolute solution to go like, “I found it!”. there are some actions everyone has to take to rescue these people’s lives.

What some people are already doing is building up walls around their houses to prevent possible water damages. It rather seems to be a temporary solution.

The government is trying to send people to countries like Australia and New Zealand to work and get used to the new situation. It’s not easy to leave such beautiful beaches, but it seems to be working so far and they’re planning to send even more people out.

Because of the drowning islands, the government needs to buy new islands to relocate its population but it costs a lot of money which they’re short of!

How can we help Kiribati?

The general answer would be considering doing actions to slow down the climate change and global warming issues but that’s not the case for Kiribati, as it’s too late for them and after 2010, they’re seeing its impacts on their daily life. They need immediate help!

Kiribati is not short in making you an unforgettable sunny paradise vacation. the beaches have white sand and the ocean shows every shade of blue you could imagine. If you travel there, you are having fun, knowing that your money is being spent to help other human beings.

what to do in Kiribati

as mentioned above, on any Kiribati’s island, you are just a few meters away to see something like the picture below!

Cathedral of Our Lady of the Rosary in Kiribati

Don’t forget to visit the country’s biggest church, located in Koinawa with a population of 300 people! 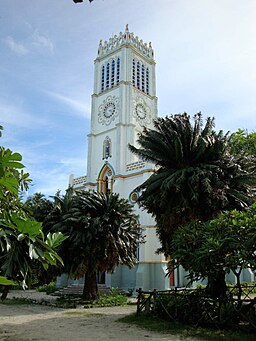 Each year, a lot of beautiful birds migrate to the Christmas Island in Kiribati. It would be so peaceful to look at those cute creatures!