Africa is a wonderful, yet unknown place. Although many African nations are struggling in today’s world, not everything about them is sad! The cultures are influenced by their previous colonizers, so are their languages.

Have you heard of Eritrea? Does its name sound familiar? Good enough for the start.

Read the post to get more familiar with this alien country!

Italy has not colonized any other African nation but Eritrea. As Italians were there, they built towns to reside in and the more they stayed, the more buildings were built and the more culture got influenced by them.

Britain took over Eritrea after a battle with Italy and became the country’s admin until 1950. Then Eritrea was kind of under Russia’s control until finally, their neighbor, Ethiopia colonized them and they weren’t independent until 1991.

After being recognized as a country, they started a one political system government with no other competitor and made military services mandatory for both genders. They served for 3 years for a while until the government was like, “You know what? I’m gonna keep you guys as soldiers as long as I want!” that resulted in mass defection to Ethiopia. The situation is still the same, people run away through the desert in search of a better life. So far, %6 of the population has fled!

People in Eritrea are completely identical with their Ethiopian cousins, sharing the same culture and almost some understandings of each other’s languages.

There’s no official language in Eritrea but most people can communicate in Italian, English, Arabic, as well as their local languages like Tigrinya.

%60 of the population is Christian while the rest is Muslim.

People would smile at you but they’re usually shy to start a conversation.

What to do in Eritrea

The capital, Asmara is filled with Italian style cafes, restaurants, and bars. They are all addicted to Pizza, Pasta, and Latte! The streets are also filled with old Italian cars and buildings!

Built by Italians, this petrol station never imagined that one day, UNESCO would consider it as one of the main reasons to add the whole city of Asmara to the world heritage list!

Shell was using this station until recently that the government was like, “It’s not a bad idea to protect this thing!” 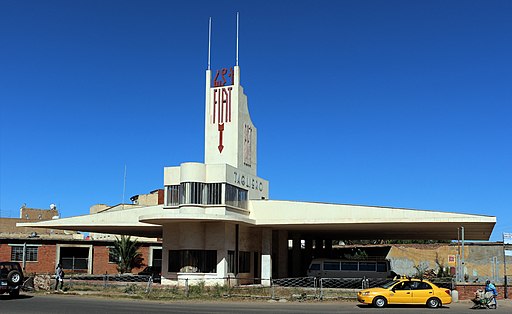 Church of Our Lady of the Rosary in Eritrea

Again, built by Italians, this church would make you feel like you’re in the middle of Rome, not Asmara!

It’s an open-air workshop where your mind gets blown away. You’ll find anything classified as useless in the West, being traded and recycled!

28 thoughts on “The Ultimate travel guide to Eritrea”