Slane is only thirty minutes away from Dublin. This village is known for its 300 years old castle, where Rock music A-listers like U2, the Rolling Stones, Bruce Springsteen, and Metallica performed on Castle’s lawn. The good thing about Slane castle is that it hires locals for its whiskey-making business!

But there are also other attractions in Slane such as the nearby ruins or the famous Boyles of Slane on Main street and enjoy one of the best pubs in Ireland. 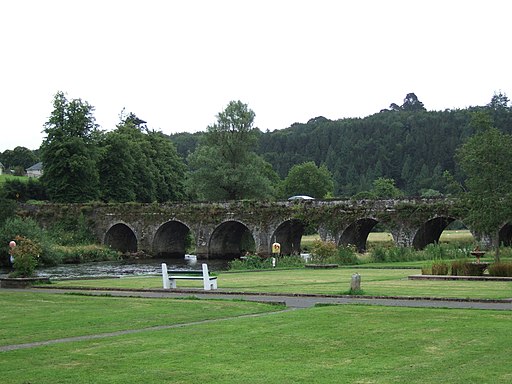 Inistioge is the lazy place everyone dreams of. Just have a delicious lunch and sit right beside the ten arch bridge and stare at the lazy River, Nore. I mean, sign me up! No wonder why three Hollywood movies of Widows Peak (1994), Circle of Friends (1995), and The Secret Scripture (2015) were filmed in Inistioge!

Sitting beside the Wicklow mountains, Wicklow town is where you have countless ways to entertain yourself, like hiking the Mottee Stone, taking a ghost tour of the abandoned 18th-century prison, or simply having a healthy meal at Vital health cafe and a delicious sweet at the award-winning bakery, Firehouse Bakery in the nearby town of Delgany.

There’s a good reason why they call Wicklow as the Garden of Ireland. When it’s sunny, you’d see tons of cyclists, hikers, and a lot of other happy people roaming around.

Glengarriff in West Cork is probably Ireland’s biggest secret! This green village is where you can hike its gorgeous hills, do island adventure, or just do some lazy shopping!

Don’t forget to visit the Italian garden in Garinish island to experience its tropical micro-climate weather. If you’re lucky, you can also spot seals and sea eagles on the short boat trip to Garnish island from Glengarriff.

This brightly-colored town’s character is more than a fishing village. The history in Kinsale goes all the way back to the 12th century. You can learn more about this town’s history at Desmond Castle to hit the jackpot as it showcases both the Kinsale’s history and Ireland’s wine history at its International Museum of Wine.

Kinsale is also known for its delicious food. Try some fancy seafood at Fishy Fishy, or stop by Blacks Brewery for a tour and a pint.

Bantry has played a central role in Ireland’s history as an early Christian saint and explorer St Brendan was from this town. Although it’s never been proven, some historians believe that St Brendan was the one who discovered Greenland and America, not Christopher Columbus.

Fun fact about Bantry is that it’s still in the hands of the family who built it! It is an amazing place to try some real Irish food.

If you like surfing, Dingle is the place to go in Ireland for its ideal surfing conditions. Plus, you don’t want to miss visiting Fungie, the famous wild dolphin of Dingle. He is living in his natural place and loves showing up for visitors since 1983! You can also visit the ancient Gallarus Oratory or the viewpoint on Mount Brandon if you’re up for a hike.

This perfectly hidden town in Ireland is more than only its iconic Westport House. You can also visit amazing places like the slopes at Croagh Patrick, Killary Fjord Castle, the National Museum of Ireland, and the Rockfleet Castle.

Are you an Irish pub lover? Then don’t hesitate to visit Ballyvaughan as this town has one pub for every 37 people of its population. I mean how cool would it be to watch the sunset over Galway bay and then head out to a great restaurant for dinner and a shot of Irish whiskey at O’Loclainn’s, followed by a beer at a pub? (I’m not an alcoholic, you are!)

6 thoughts on “10 Amazing hidden towns and villages in Ireland”