One of the biggest perks of traveling overseas is food. There’s such a big joy in trying unknown tastes and spices, dish pairs you could never imagine, and discovering a new culture in a foodie way. People around the world are becoming more and more interested in vegetarianism and veganism, but there are still millions of people out there (if not billion) who would die for a good meat dish.

This post is for them meat-lovers who would love traveling and trying new meat recipes around the world, as in this post we’ll introduce you to the top 16 best countries for meat-lovers to visit.

If meat-based cuisines were to have a kingdom, Turkey would be their king! This country is a haven for meat-lovers. You’ll find a lot of amazing meat-based dishes that are cooked perfectly. If you like Beef and lamb Donair, you’d be surprised to know that Turkey is the birthplace of donair. And to give you more reasons, the donairs we have in North America are fine but the original donairs in Turkey would blow your mind away! And it’s not all about Döner Kebab, there are a lot of other Turkish foods such as Çöp şiş (lamb/Mutton dish), Shish kebab, Adana kebab, and more!
The bonus is that visiting Turkey will not cost you a fortune! In fact, Turkey is one of the countries where your dollar would stretch the most!

People in the United States of America are very proud of their meat dishes. You’d definitely eat your best burger ever in the US, and that’s not the end of the story. From Warm Southern US to freezing north, meat is the base in a lot of families’ diets. If you’re really serious about meat dishes in the US, go to Texas where you’d find the finest American barbecue, and travel North to Buffalo to try the best Buffalo wings in the world at its origin city, Buffalo, NY.

Spain is probably the most famous country in the world for its meat dishes. Spaniards are experts in Chorizo (pork sausage), they also make the best Jamon Iberico in the world that would take you to heaven if you eat it with a glass of Spanish Grenache. In the northwest of Spain, veal is also eaten regularly. The animals are fed outside in the peaceful nature of Spain which takes the meat quality to the next level in Spain.

Many foodies believe that Australia produces the best-quality meat in the world. With the amazing sunny climate Aussies have year-round and those stunning national parks and scenery, we shouldn’t blame them for their love of barbecuing fine Aussie lamb and beef meat.

Europeans know very well how great it is to travel to Iran because of its’ currency crisis which makes it a cheap destination and an amazing country for diversity in cultures and food! Recently a lot of famous YouTube food vloggers traveled to Iran and uncovered the deliciousness behind Iranian cuisine. Being the birthplace of Kebab, Persian cuisine has a lot of meat dishes for you to enjoy. Chelow kebab, Jujeh kabab, and Kabab barg are only a few to mention.

Brazil is one of the most well-known meat-lovers countries in the world to visit. If you’re a barbecued meat fan, Brazil is the way to go. Churasco involves seasoning and grilling picanha beef to medium-rare and serving it on skewers. Or how about feijoada becoming your new comfort food? It is a stew with sausage, pork, and black beans. Greatness, eh? Just visit Brazil and you’d be surprised why you haven’t discovered such meat heaven before!

Let’s pretend you don’t know that Wagyu beef is from Japan! If that’s not satisfying enough to book your flight and hotel to Tokyo, Japan, how about Kobe beef? Even the best Japanese Kobe beef restaurant in America isn’t as good as a regular Kobe beef restaurant in Japan! Plus, they got all of these amazing pork dishes and local restaurants where you can grill your own meat and vegetables.

This small South American nation is sandwiched between Brazil and Argentina. This unique situation inspired Uruguayan cuisine to have the best of both worlds, Spanish and Portuguese! Across the country, you’ll find slabs of meat grilling over wood fires at dedicated restaurants called parrillas. But that’s not about it. Despite its small size (Compared to its huge neighbors), Uruguay deserves an independent place in foodies’ stomach for its jumble of Mediterranean cuisines and South American flavors.

This small landlocked European nation is in the Balkans peninsula, having borders with Greece, Serbia, Kosovo, Bulgaria, and Albania. All of these amazing neighbors had a positive impact on Macedonian’s cuisine which makes Macedonians very proud of both their country and cuisine today. I mean, a grilled Macedonian sausage, paired with a bowl of soup can’t go wrong! If you’re a meat-lover traveler, this beautiful country would treat your stomach like a sweetheart!

With nyama choma, a gentle charcoal crust meat (Mostly beef or goat), served as a platter of bite-sized pieces, being Kenya’s national dish, you can kind of say how most of the Kenyan cuisine is like. They got countless barbecued meat dishes, as well as meat-rich stews, and soups.

Armenia is a cute small landlocked nation in Europe, bordering Iran, Turkey, Azerbaijan, and Georgia. Armenian cuisine is a well-kept secret of the country, only getting revealed to those adventurous peeps who travel to Armenia and try those mouthwatering Armenian dishes such as Kchuch, Lula kebab, and Srama! 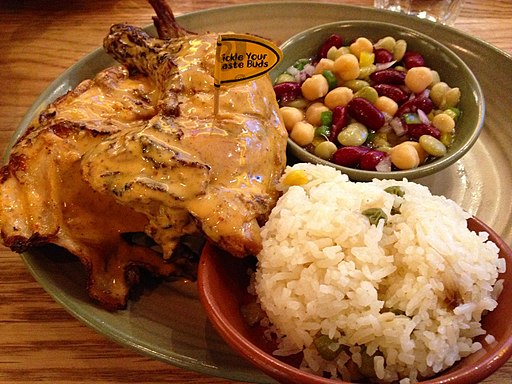 I mean, who hasn’t heard of Portuguese meat dishes? Being Spain’s best friend and neighbor, Portugal is proud of its cuisine which is becoming more and more known and popular in the world. Bifana? Portuguese! Peri-Peri chicken? Portuguese! Cozido? Of course Portuguese! Just walk on the streets at night and enjoy watching friends and families sitting in cafes, enjoying their meat dishes, and fine Portuguese wine!

A chunk of grilled meat, accompanied with mustard, french fries, and local Romanian beer is how Romania welcomes its visitors! Being a Balkan nation, it would’ve been a surprise if Romanians weren’t big fans of meat! Walk on the streets of any local neighborhood in Romania to find your way towards a street food barbecue that can be chased by the smoke that’s making the alleys smell amazing!

Travelers love Morocco for its architecture, culture, and people, not knowing that the main thing they’ll fall in love with, in Morocco will be Moroccan cuisine. No wonder why every single traveler who’s been to Morocco, brought a Tajine dish back home with them! Just this clay dish itself takes the taste of the lamb, beef, or chicken that’s getting cooked in there to another level!

It’s impossible to talk about a meat-lovers paradise and not picturing Argentina right away! Their national dish, Asado, is barbecued meat! Try getting invited to a local’s home on Sunday to be welcomed by amazing barbecued meat that’s like a national ritual in Argentina every single weekend!

Do you love pork? So do Philippinos! How about an entire pig being roasted? or a pork stew, sausage, or charred pork? Or even pork curry? Just name it and Philippino cuisine would say, “Here you go!” If you love pork, you want to vacation in the Philippines right now!