Africa, Africa, … Africa! I just can’t get enough of this amazing continent. Even though It has a lot to offer, yet very few outsiders dare to take the journey and visit it! You’ll find amazing stories about great countries in Africa, in its category on DB.

If someone asks which country represents the African culture the best, your first answer might be Egypt or Ethiopia which is partially true, but did you know that Mali has once been the center of a great African empire called “Mali Empire” where “Mansa Musa I of Mali” ruled as its tenth Emperor who is officially the richest man of all times? Mansa Musa’s net worth is believed to be more than $400 Billion! That’s like 4 times more than Bill Gates, the richest man in the world now!

Let’s see what else this historical country has that we still have no clue about!

In recent history, Mali was annexed to France West African territories and it has been that way until June 20, 1960, when Mali became independent and restarted its journey as a sovereign nation.
Today, the government is somewhat Democratic, but there’s still a lot of room to grow. It could still have good relations with France, as well as Its neighbors. There has been a civil war in the country but now, the situation is much better, but if you’re planning to travel there, you’d have to be cautious in some areas of southwestern of the country.

The country is diverse, made up of different African tribes. The country’s official language is French whereas there are 15 other languages are considered as national languages, but not official.

People are mostly Muslim with only %5 being Christian but regardless of their religions, they still carry their traditional beliefs and festivals with them until today.

What to do in Mali

Timbuktu is one of the jewels of mankind’s history, holding the historical sites of the Mali Empire. The whole city is a UNESCO World Heritage Site.

Located in Mali’s capital, Bamako, this Museum showcased the history of Mali, as well as the ritual objects, dress, and musical instruments of the country’s ethnic groups.

This area is where the Dogon People live. they are a tribe with traditions going back to a few thousand years ago! If you’d like to visit their Villages, you’ll be accompanied by a local tour guide and can sleep in the hostels made for tourists in some of the villages. This area is on the list of UNESCO World Heritage Site since 1989! 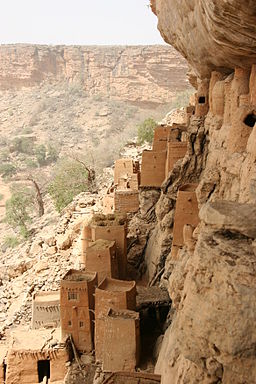