Isn’t it interesting that there are still a lot of places in the world, yet to get discovered by you?

East Timor (Timor-Leste) is a beautiful tiny island that is unknown to most people.

It has the potential to be the next Phuket or Bali! Wanna know why? Read this post to figure out!

East Timor (Timor-Leste) was a Portuguese colony until 1975 and soon after independence, their neighbor Indonesia was like, “Why not add them as another province?”, East Timor replied, “Excuse me?” but Indonesia did it before explaining again and kept them until 1999!

After that, they could finally have control over their land that was half of the Timor’s Island. the other half still belongs to Indonesia. Their situation is almost like Cyprus and Northern Cyprus but with the difference that in Timor, despite the similarity in being Catholic, the western side was willing to remain within Indonesia because of their language and cultural differences.

They speak Portuguese and are very welcoming. You’ll make friends with almost everyone you talk to on the streets!

What to do in East Timor (Timor-Leste)

The East Timor‘s currency is US dollar

Although they have a few local coins, Their official currency is US dollar, which makes it easy to exchange from your money where ever you feel like it!

It’s a coastal country with tons of stunning beaches to enjoy. Chances are you have the beach to yourself since it’s not a tourist destination yet! You’ll get to experience what Leonardo Decaprio does on his private island!

Since they are Christian, they have a statue of Jesus Christ at the top of their capital, Dili.

The funny story about this statue is that Indonesia’s Islamic government gave it to them as a gift! (I’m sure I’m not the only one surprised by this fact!) 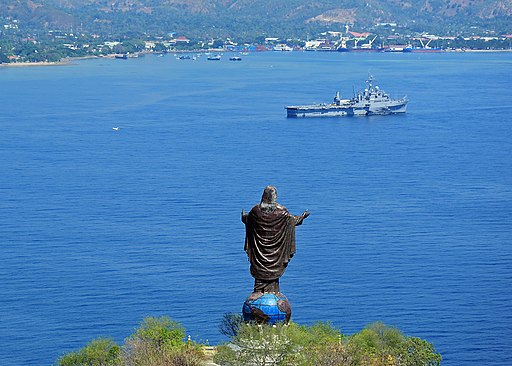 This mountain is the highest point on the Timor island. The area is beautiful to spend a few hours at if you get tired of their cool beaches!

Since half of the island belongs to Indonesia, it would be nice to grab your passport and treat yourself with some Indonesian dishes! Just make sure that your East Timorese visa is valid when you are coming back to it!