A lot of Westerners are afraid of visiting Iran, not knowing that with about 9 million international tourists, just in 2019, Iran is one of the most visited countries in the Middle East and Asia. After Iran’s 1979 revolution, the tourism industry almost faded away, but it started growing each year from 1995 onward, and if it wasn’t for the Coronavirus pandemic, Iran would’ve broken its last year’s tourism record!

Are you curious to know what people love the most about this beloved country? Then you’re in luck as in this post, we’ll talk about the top 12 reasons why you should visit Iran.

According to countless visitors who had been to Iran, this country is one of the safest places they’ve ever traveled to. As long as you avoid the Sistan and Baluchestan Province (near Pakistan’s border) and the areas near Iraq’s border, you’re safe everywhere else in Iran.

There’s this stereotype that Iranians hate Americans and Westerners, but tell Iranians that you’re from America (or other Western countries) and you’d be treated like a famous Hollywood star! Iranians believe that the guest is a gift from God and would try their best to make you feel welcome and wanted! You’d get a lot of gifts and food from people, plus most of them would show a “V” (as a victory sign) in front of your camera.

Because of U.S. sanctions against Iran, the currency’s value has dropped significantly in the past few years which means you’re in for a real treat! Let’s put it this way, before the sanctions, (Only for simplicity’s sake, Iran’s currency is Rial!) each Iranian dollar was equal to 1 US dollar while now the exchange rate for 1 USD is about 25 Iranian dollar.

How about fancy ice cream for 30 cents? Or a comfortable hotel room for $20 per night? Or a bus ticket from Tehran to Shiraz for $5 (900 km apart)?

You can easily treat yourself nicely in Iran without even spending as much as a normal trip!

Despite what some people who think of the Middle East as being a big desert, this region and especially Iran is blessed with different climates year-round. You can ski in Dizin, the largest Iranian ski resort (yes, Iran has several natural ski resorts), explore dense jungles near the Caspian sea, or enjoy an extended summer vacation in the Kish island, located on the beautiful Persian Gulf.

There’s a good reason why Los Angeles is in love with mouthwatering Persian cuisine, it’s so good! Being one of the best countries to visit for meat-lovers, Iran would surprise you with delicious kebabs. But if you’re a vegetarian, Persian cuisine still got you covered with countless stews and soups that you never tried before.

Iran’s official language is Persian, but people are of different backgrounds. On the Northwestern side, people are Turk and speak Turkish while on the South Western side people are Arab and speak Arabic. in North-Eastern Iran, people are of Turkmen and Mongolian background while in North a lot of them are of Russian descendant. In Central Iran, there’s a minority of Armenians who escaped Armenia about 200 years ago. There are even some Black African descendants living in the Southern side of Iran, along the Persian Gulf’s coastline.

Visiting Iran is almost like visiting a compact world which you don’t want to miss! 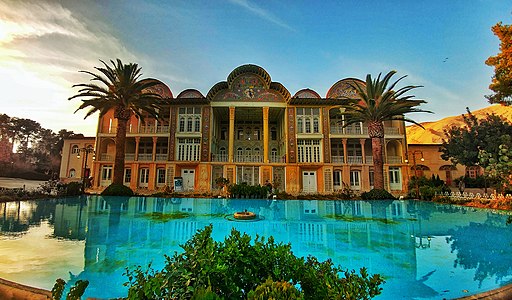 Iran is full of beautiful magical gardens. Even CNN recognized Shiraz, a city in Iran as one of the best places in the world to propose on Valentine’s day because of its romantic gardens. Visiting places like Eram garden, Afif Abad garden, and Shapouri house would blow your mind away from how beautiful and majestic a garden could be.

Rumi, Sa’di, and Hafez are all Iranian poets whose poem books are still influencing international literature even centuries after their death.

According to WorldAtlas, Iran is the oldest country in the world where habitation goes as far back as the Lower Paleolithic (3200 BC). There are a lot of historic places to experience this old history in person. Plus, even though people’s lifestyle is becoming more Western-style nowadays, you can still feel like the rich history behind people’s attitudes.

Having 24 UNESCO world heritage sites means Iran has a lot of must-see places you should add to your bucket list. From Persepolis (world’s eighth wonder) to Armenian Monastic Ensembles of Iran, to Hyrcanian Forests and Lut Desert.

Pro tip: experienced travelers always visit UNESCO world heritage sites in a country first, because they know no place would be chosen as a heritage site without a reason!

Iran has a lot of amazing cities all around the country. This country is home to some of the most developed cities in the Middle East. From Tehran, a megacity that never sleeps, to magical Isfahan city with stunning bridges and beautiful architecture, you’d definitely have to go back to Iran several times to visit all the cities.

Villages in Iran are even more interesting than the cities. Unfortunately, the villagers are moving to big cities faster than ever to have better amenities and more job opportunities, so not a lot of traditional villages are left. But you’re still be able to find the charm of towns like Abyaneh to experience their lifestyle firsthand.

Iranians love to chill in a cafe to smoke Iranian Ghelyoun (Hookah) and chat or gather in a park with friends and family for tea and short conversations. Then when you’re done exploring for the day, join them, and enjoy the relaxed Iranian nights.

10 thoughts on “Top 12 reason why you should visit Iran”