Is Tajikistan a country? Is Tajikistan safe to visit? These two questions are often asked when the subject is about the beautiful country of Tajikistan in Central Asia. This amazing country has a lot to offer, yet unknown which is exactly one of the benefits of visiting Tajikistan! It only means that this country is untouched, unspoiled, and unrivaled.

If you never heard of Tajikistan before, continue reading as in this post we’ll talk about the top 10 reasons to visit Tajikistan.

People are the main attraction in Tajikistan. There is this similar story of tourists visiting Tajikistan for its pristine nature and end up falling in love with Tajiks more! People are generous and believe that guests are gifts from God and that they should be respected and fed to death! Seriously, when a Tajik family host you, they’ll bring dish after dish to force-feed you, then they start offering you sweets and drinks.

Tajikistan is one of the poorest countries in the world. But since the people are very hospitable, they would even go into debt, just to feed you as generous as possible. So, when a family is hosting you, give them some Somoni (money), if they refuse it, give it to their oldest child, and if that theory didn’t work out too, hide it somewhere where they can find after you leave. 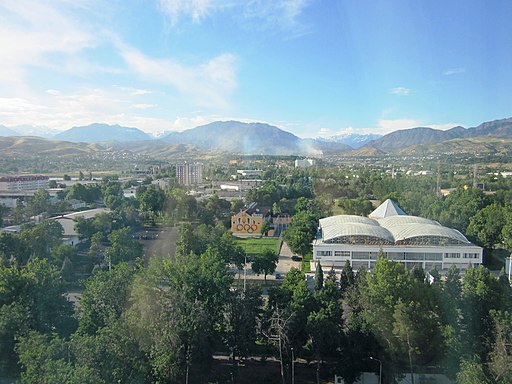 Not all cool cities are as famous as Paris and New York City. Tajikistan is home to some of the most beautiful, yet unknown and untouched cities and towns like Dushanbe, Khorog, Khujand, Panjakent, Istaravshan, and Murghab. Tajik cities aren’t fancy or developed, but they make you feel at home. It’s the citizens that make a city or town worth visiting, not just the attractions!

Even though Tajikistan’s history goes back to more than 3,000 years ago, it has never been an independent country until 1991, when the Soviet Union countries started rebelling and gaining independence. This country has been ruled by the Arabs, Mongols, Timurids, Turkic, Persians, and Russians. So, you can expect to see a lot of amazing historic places and museums in Tajikistan.

Best Road Trip Of Your Life

An increasing number of travelers are choosing to overland Europe to Asia by bicycle, car, or hitchhiking. And Pamir road in Tajikistan is one of the highlights of their EuroAsian trip, because of its eye-catching scenery and amazing people who are living in the towns nearby the main road. Even if you’re not going to visit Tajikistan, stop by the towns and do some local stuff, you’ll love it!

Tajikistan has endless lakes such as Iskanderkul, Khafrazdara Lake, Karakul, Haft Kul, Lake Sarez, Zor-Kul, Alovaddin & Kulikalon Lakes, and Timur Dara, just to name a few. If you want to visit them at their finest tho, visit Tajikistan lakes around sunrise as the reflection of the mountain in the water is magical.

Tajikistan is a mountainous country. About 93% of its territory is occupied by mountains, while about half of the territory lies at an altitude of over 3000 meters. Absolute altitude ranges from 300 to 7495 meters above sea level.

You would definitely fall in love with Tajik mountains like the Pamir Mountains, Fann Mountains, Zeravshan Range, Aktau Range, and Shokhdara Mountains. But since most of them are way above the sea level, the lack of oxygen is real!

Tajikistan is one of the countries where the dollar goes a long way! The country’s economy is weak and the currency, Tajikistani somoni weak against USD or EUR which is not good for its people, but great news for budget travelers who like to travel internationally and get the most out of their hard-earned money.

Tajikistan is one of the most affordable countries to visit in the world. Just a simple search on Numbeo’s website shows how affordable Dushanbe, the capital is, and yet, Dushanbe is the most expensive city in Tajikistan.

If you travel to Southern Tajikistan, near its border with Afghanistan, you’ll find weekly markets at three settlements in the Pamirs (Ruzvay, Khorog, and Ishkashim). When the local security condition is fine at the border, the Tajik border officers allow tourists to go to the no-man’s-land between the two countries to shop alongside Tajik traders and Afghani merchants.

If you’re not going to travel to Afghanistan during your Tajikistan trip, it’s the best time to buy some Afghan souvenirs such as pakol hats or salwar kameez clothing.

Not everybody’s a professional hiker but when it comes to the outstanding mountains of Tajikistan, you can still enjoy the view in a Soviet summer camp called Iskander-Kol that is a beautiful lake with a view of mountains, only half an hour away from the capital, Dushanbe.

The bonus to all of those amazing reasons to visit Tajikistan is the fact that you’d barely see other tourists around as Tajikistan is still unknown to mass tourism, but is on its way to get known by more travelers. Then visit this hidden gem in Central Asia while it’s still all yours!

5 thoughts on “10 reasons to visit Tajikistan”