Africa is an interesting continent to explore, yet underrated with a lot of hidden gems to discover, like Ethiopia, where you’re 8 years younger, or Eritrea, where you’ll find the tastiest pasta and pizza in the world outside Italy.
In this post, we’ll talk about the coolest country in Africa where you’ll find Africa’s friendliest people. We’ll learn about Senegal’s people, Senegal’s language, Senegal’s religion, Senegal’s map, and we’ll be checking if Senegal is a country or a city, if Senegal is safe to visit, what to do in Senegal while you are there, sightseeing places to visit in Senegal!

Browse our Africa Category If you’re ready to get amazed by this incredible continent.

Senegal is located in West Africa, where almost all of the countries were annexed by France at one point, including Senegal. In 1959, Senegal and a region called French Sudan joined each other and formed a new country but it didn’t work out as expected, so they separated into Senegal and Mali.

Senegal has always been one of the most stable countries in Africa throughout time and it is considered a semi-democratic state!

Most Senegalese people are of African descendants, however, a small minority of 50,000 French and Lebanese people are living in Senegal as well. Most of them are spending their retirement in one of the private retirement resorts in Senegal!

What to do in Senegal

Dakar, the capital of Senegal

Dakar is by far, the most favorite city of travelers who visit Africa. This friendly, vibrant city is safe and welcoming, plus Dakar has beautiful world-class beaches to chill at as well as top hotels and resorts!

Bonus point: Dakar is cheaper than your expectations! 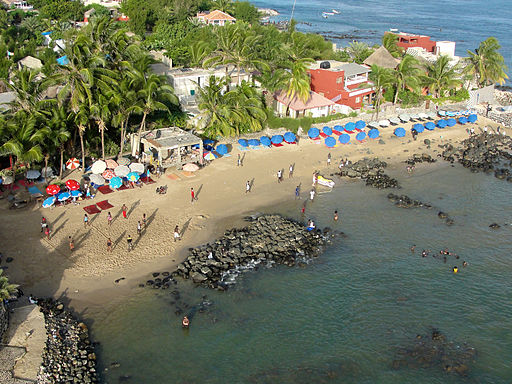 The African Renaissance Monument is a monumental group of 52 meters in bronze and copper in Ouakam, a district municipality of Dakar, Senegal.

The monument represents a couple and their child, drawn up to the sky. It was officially introduced on April 3, 2010, during the ceremonies of the fiftieth anniversary of the independence of Senegal.